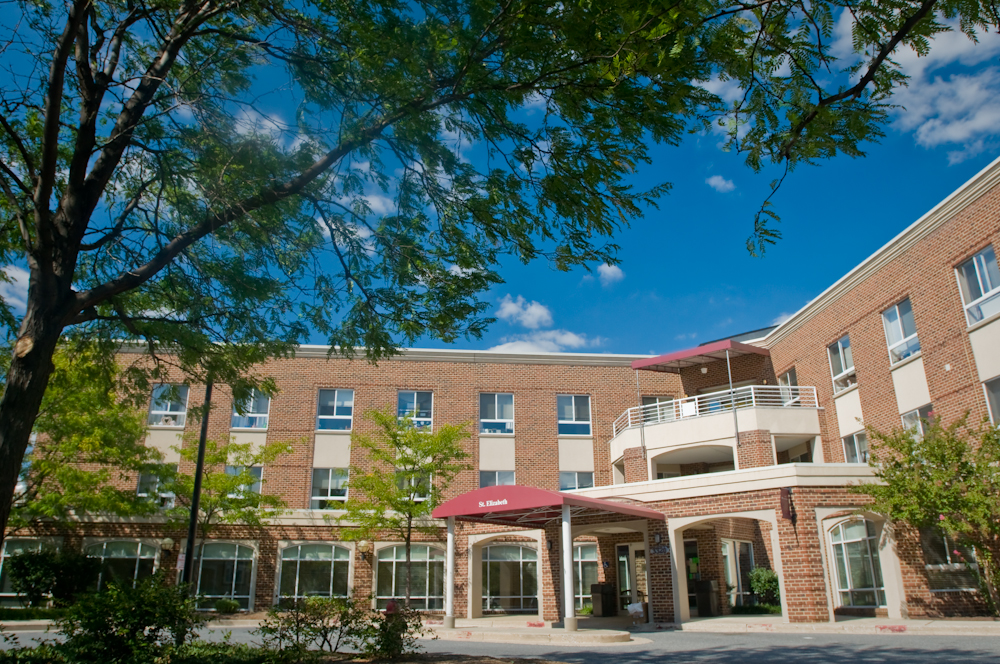 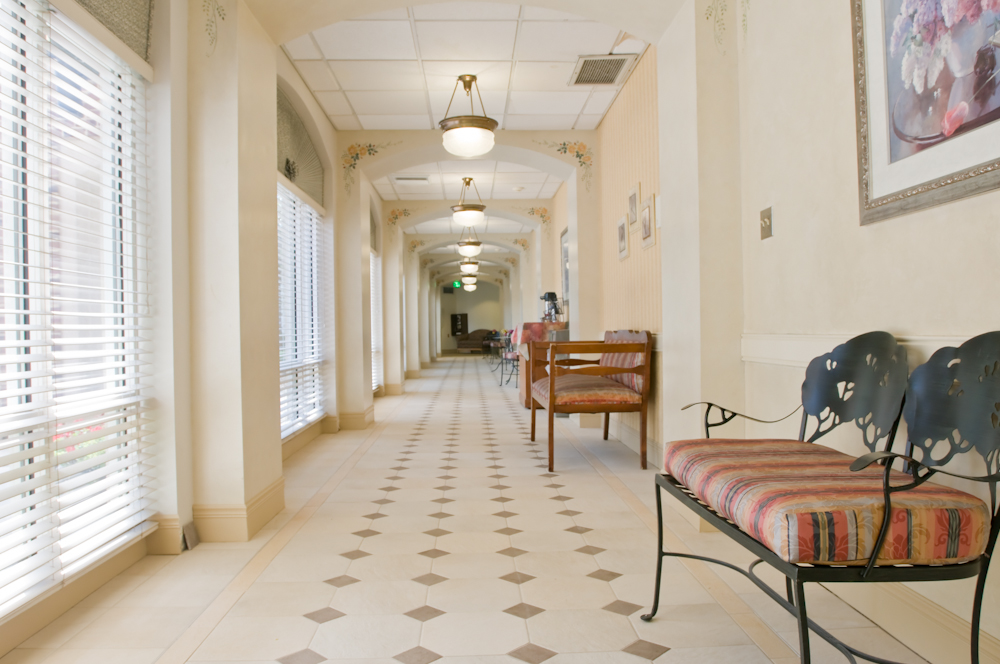 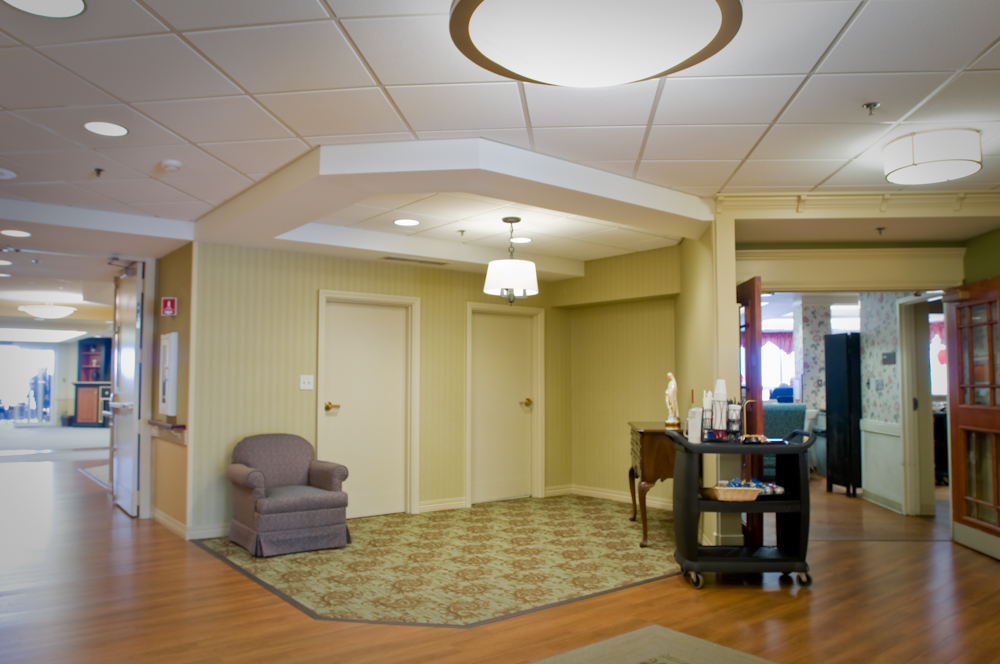 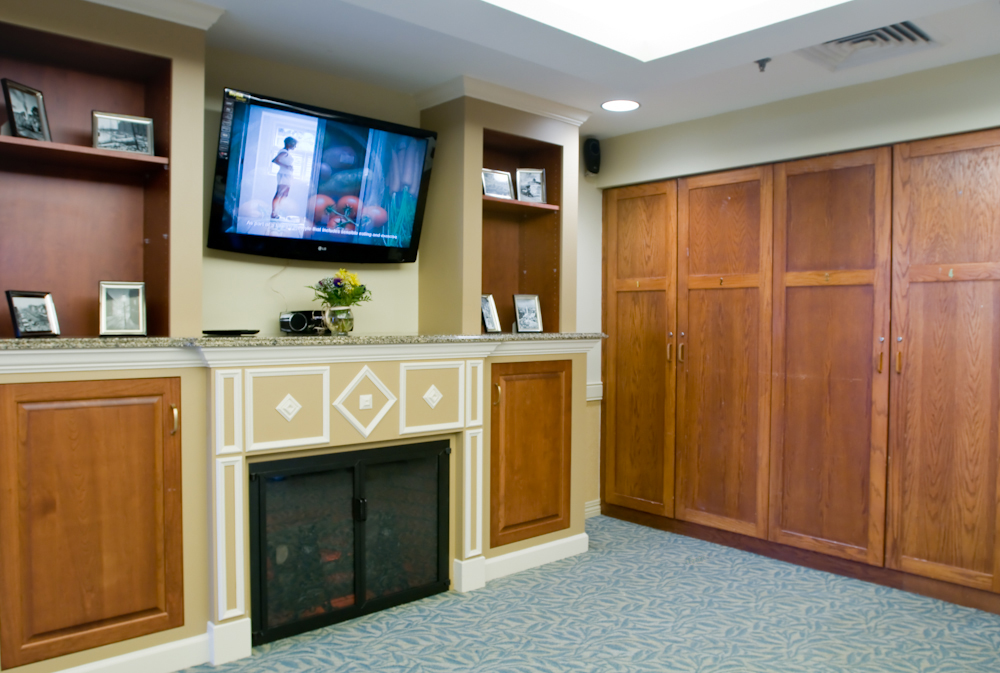 Renovating the public areas of an occupied building is always challenging, but doing so throughout a multi-story structure occupied by the elderly and their caretakers is particularly so.   Virtually every finish material for the renovation was either custom made for the project or purchased from vendors all throughout the United States and Europe. The design intent for the renovations was that newly installed entryways into the resident rooms, hallways and common areas would resemble their former homes and to create “neighborhoods” where the elders reside in a “person first” environment. Seven different pediment entries were all custom fabricated and received a different painted finish to create the appearance of a “neighborhood”. Work was completed to the resident entries and corridors without need for a single resident relocation. Each of the corridors was completely renovated with new wall coverings, new drywall bulkheads and custom designed residential style lighting.

The existing nurses’ stations were converted to gathering areas and custom built-in charting/med stations were relocated to newly created recesses within the corridors.   CAM’s forces completely renovated the two day rooms on each floor, leaving one operational while the other was under construction. Warming kitchens were renovated and a new scullery to serve the kitchens constructed without interrupting meal service. Four batheries on each floor were completely renovated with custom made, and onsite cut, European ceramic tile, residential style lighting, towel warmers, and new bathing equipment

Elevator lobbies and common areas throughout the resident floors, as well as the main lobby with its connecting hallways, were renovated without interruption to the daily activities of the facility. Multiple phases, day room relocations and the challenge of a schedule was slowed so as not to engender anxiety among the residents was ably handled by CAM forces.

Of a particular challenge was the fact that the originally contracted design team defaulted as the project began; making CAM truly the design/builder for the project.

The second part of CAM’s contract included the construction of the new outdoor pavilion directly adjacent the roadway leading to St Elizabeth’s main entry which is used for parties and entertainment for the residents and their families. This new custom-built structure provides a sheltered area for entertaining or respite.